THEO ‘The Game Of Ouroboros’ is my progressive rock release. I worked on the album for almost four years in between touring with the Janiva Magness band, playing numerous local gigs, tuning and repairing pianos, and releasing two other albums (organissimo’s Dedicated and Jim Alfredson’s Dirty Fingers – A Tribute To Big John Patton).

I wanted to not only bring the keyboards back to the forefront in rock music but also strike a balance between classic vintage sounds and more modern textures. In this multi-part series, I will describe the different keyboards and synthesizers, both hardware and software, that I used on the album. You can read Part 1 here.

It goes without saying that the original Minimoog is an iconic instrument and its legacy is well deserved. I always wanted a Minimoog but decided on the Voyager, Moog’s modern re-creation, due to the performance features including presets. As cool as the idea is in theory, I did not want to haul around two or more original Minimoogs just to have two different sounds available while playing live.

I purchased my Signature Edition Voyager in the early spring of 2008. I bought it used from a fellow synthesizer enthusiast in St. Claire Shores, MI. When I walked into his modest brick home that sunny yet chilly March day, I entered a living room filled with amazing analog synthesizers including an original Minimoog, two ARP 2600s, Korg PS series synths, a couple EMS VC3 synths, a Memorymoog, and more that I cannot even recall. To my surprise he had kids and a wife as well! He recorded everything onto 1″ tape and his music, which he graciously played for me, is best described as Berlin-style ambient electronica (Tangerine Dream). 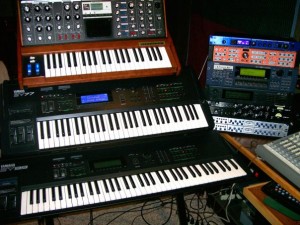 The Voyager was my first analog synthesizer. I had grown up with digital synths including the venerable Yamaha DX7. I also briefly had an Ensoniq ESQ-1, a Casio CZ-1000 borrowed from a friend, and later my Yamaha SY77 which I still own and use. But I wanted a real analog for some time and the Voyager was my ideal.

I was also in the process of recording organissimo’s third album, Groovadelphia, in my home studio. One particular track, If Not Now When?, needed something. I kept hearing a simple sinusoidal lead line, like Stevie Wonder would’ve played on the TONTO synthesizer, weaving in and out. I made a sound on my Motif ES rack and it worked fine enough but when I finally got the Voyager home and created the patch it sounded so much richer and fit in the mix so easily. I was hooked. I made up my mind that I would get a true analog polysynth (see The Keyboards of THEO Part I – The Alesis Andromeda).

I used the Voyager extensively on THEO – The Game of Ouroboros. Most of the lead synth lines are the Voyager, sometimes layered with Steinberg’s Retrologue just to add to the thickness of the sound. The ethereal chords at the beginning of The Blood That Floats My Throne are also the Voyager. I also used it for almost all the basslines during the writing and demo stage but those were replaced by Gary Davenport on Chapman stick or fretless bass.

Funny enough, I also used the Voyager as my main MIDI controller as I was writing the songs on THEO, playing parts into Cubase. A lot of these parts would eventually be replaced by real instruments but a good portion of them stayed including the tracks of Camel Audio’s Alchemy VST.

One of my favorite solos on the THEO album is from These Are The Simple Days, which is played on the Moog Voyager. It was also the first through-composed solo I wrote on the album, which was a real challenge for me. Improvising a solo is no problem with my jazz background, but actually writing a solo that will always be the same (like Tony Banks did with Genesis) was much more difficult. After weeks of failures, I finally set upon the idea of improvising several takes and then combining the best elements into a cohesive statement. I think it turned out well.

The above is from the original demo recording with fake drums and no guitar yet added. You can hear the entire song from the complete CD in this video.

The Moog Voyager is truly a beautiful synthesizer both aesthetically and musically. I have tried several times to replace it with other synths, mostly for live purposes (it is quite heavy and large to haul around) but nothing I’ve used so far sounds as good. It’s a joy to play and the variety of sounds is astonishing given the relative simplicity of it’s subtractive synthesis.

Next week in Pt III – The mighty synthesizers.com modular