THEO ‘The Game Of Ouroboros’ is my progressive rock release. I worked on the album for almost four years in between touring with the Janiva Magness band, playing numerous local gigs, tuning and repairing pianos, and releasing two other albums (organissimo’s Dedicated and Jim Alfredson’s Dirty Fingers – A Tribute To Big John Patton).

I wanted to not only bring the keyboards back to the forefront in rock music but also strike a balance between classic vintage sounds and more modern textures. In this multi-part series, I will describe the different keyboards and synthesizers, both hardware and software, that I used on the album.

Let’s just get this out of the way: The Alesis Andromeda is a monster synthesizer. Released in 2000 and discontinued in 2010, the Andromeda is arguably the most powerful analog polysynth ever made. 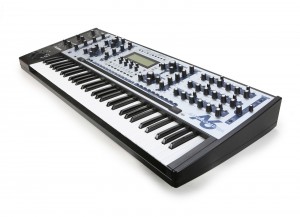 Yes, there are some weaknesses including the lack of promised poly-aftertouch and some bugs in the OS. It is also built with proprietary chips and parts are getting scarce. But the sound is incredible. It is capable of emulating a wide range of classic sounds including Minimoog style leads and basses, Oberheim pads and brass, Prophet-5 type sync leads, and even sounds reminiscent of the mighty CS80.

The Andromeda enters fairly early on THEO. That thick, swirling string sound at the intro of the very first song (the title track) is the Andromeda through an Eventide SPACE reverb pedal and then filtered in Cubase.

The Andromeda returns on the third track, Creatures of Our Comfort, in the form of the panning synth string pad and the more mellow pad. It also covers the deep synth bass at the very end.

The Andromeda is all over the next track, Idle Worship, including the panning arppegiating lines and that fantastic brass swell that sounds like UK’s classic song Alaska.

One of the coolest features of the Andromeda is the inclusion of 16 dedicated outputs, one for each voice, via eight 1/4″ TRS jacks on the back. On Idle Worship, I recorded the arppegiated lines by connecting all 16 mono outputs to a mixer, and then randomly assigning each of those 16 outputs to eight sub busses. I then recorded those eight sub busses into Cubase and panned them randomly around the 5.1 surround field so that each note of the arppegiated pattern appears at a different spot in space. The effect is pretty amazing, with notes in quick succession appearing in completely different places around your head. Even in stereo it sounds cool! Here is a test I did before the actual recording to hear how it sounds.

On the final song, Exile, the Andromeda is generating that phased string sound that reminds me of the old ARP Solina string ensemble during the quiet middle section. Originally I had used a patch from u-he’s Zebra but decided to program the sound on the Andromeda instead and I’m glad I did. It fits into the mix so much better. I believe I ran the outputs of the Andromeda into a MoogerFooger Phase pedal. The Andromeda is also doing the arppegiated line during the epic end solo section. 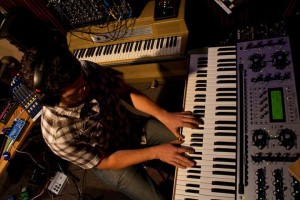 In the studio at Glenn Brown Productions for an Intergalactic Spiral session. Photo by Corrina Van Hamlin.

The Andromeda is a desert island synth for me. I hope mine never succumbs to the issues that some users have experienced, issues that can render it useless. After Alesis folded and emerged from bankruptcy under new ownership, the Andromeda was never the same and some of the later models exhibit problems including failing proprietary components. Mine appears to be functioning at 100% so far and I hope it continues to do so for years to come. It is truly the King Of Analog Polysynths and rewards patience in programming with stunning sound.

Before I purchased the Andromeda, I seriously considered buying an Oberheim Matrix 12 instead. At the time, both synths were about the same price on the used market. Since that time, the Matrix 12 has almost doubled in price and Andromeda prices have stagnated. I always wondered if I made the right decision.

A few months ago I finally got my hands on a Matrix 12 via a friend who amassed quite the vintage synth collection and while the sound was great, it didn’t blow me away. Then again, we were playing it through an mono tube amp with a small speaker. I came home confident that I made the right decision to buy the Andromeda.

Just a few days ago as of this post, that friend brought the Matrix 12 over so that I could make a demo for him. He’s selling it and since he’s not a keyboardist, he asked me to perform. Connecting the Matrix 12 to my studio monitoring system and hearing it in stereo was incredible. Here’s a video of the proceedings:

What an amazingly rich and lush sound. In the past few days, I’ve experienced doubt yet again whether I made the right choice. So I’ve spent some time really sitting down with the Andromeda and getting to know it better. And I’ve discovered some more strengths and weaknesses.

Secondly, I learned that it’s really easy to overdrive the filters both pre and post, which can lead to wave shaping (ie, distortion). Turning down the feed of the oscillators into the filters creates a much smoother, more pure analog sound.

But I also learned that the panning leaves a lot to be desired. One of the coolest features of the Oberheim is the ability to pan each voice anywhere in the stereo field, or do so randomly. This ability further increases the sense of largeness of the Oberheim.  Although there are a vast number of modulation sources for the panning, none of them that I found achieves that random voice panning effect and they all seem to affect the entire output, not individual oscillators or voices (two oscillators each). The only way to really do this is to use the individual voice outputs connected to a 16 channel mixer and set the pans on the mixer wherever you’d like. This seems like a rather confusing oversight on the part of the OS design team.

Despite this and with the help of the Andromeda Tips & Tricks article, I’m programming some really nice, deep, rich sounds from the Andromeda. My lust for the Matrix 12 is not gone yet, but it is abated somewhat.

Next week in Pt II – The Moog Voyager.