Back in April I posted a video on Youtube comparing my newly completed tonewheel set for the Hammond SK2 with its inspiration, my beautiful 1954 Hammond C2. I bought the C2 from a pawn shop in Grand Rapids in 1998. They were using the back panel, which is detachable, as a board to post notices with push-pins. The rest of the case was in pretty rough shape. I feel like I rescued it from certain death. And the best part is that it was only $400.

The other best part is that it had smooth drawbars instead of the usual ratchet style drawbars that were standard on the 2 series. I’m fairly confident that the smooth drawbars were installed at the Hammond factory due to the serial number, which dates the organ to the end of 1954. I think this C2 was one of the last off the line before they started making the C3 model, all of which had smooth drawbars. I installed a TrekII percussion unit to bring it up to B3/C3 specs and also a 122 Leslie output. My dad and I refinished the organ, too. Well, pretty much my dad did the work.  He’s gone now and so the organ has a lot of sentimental value for me. 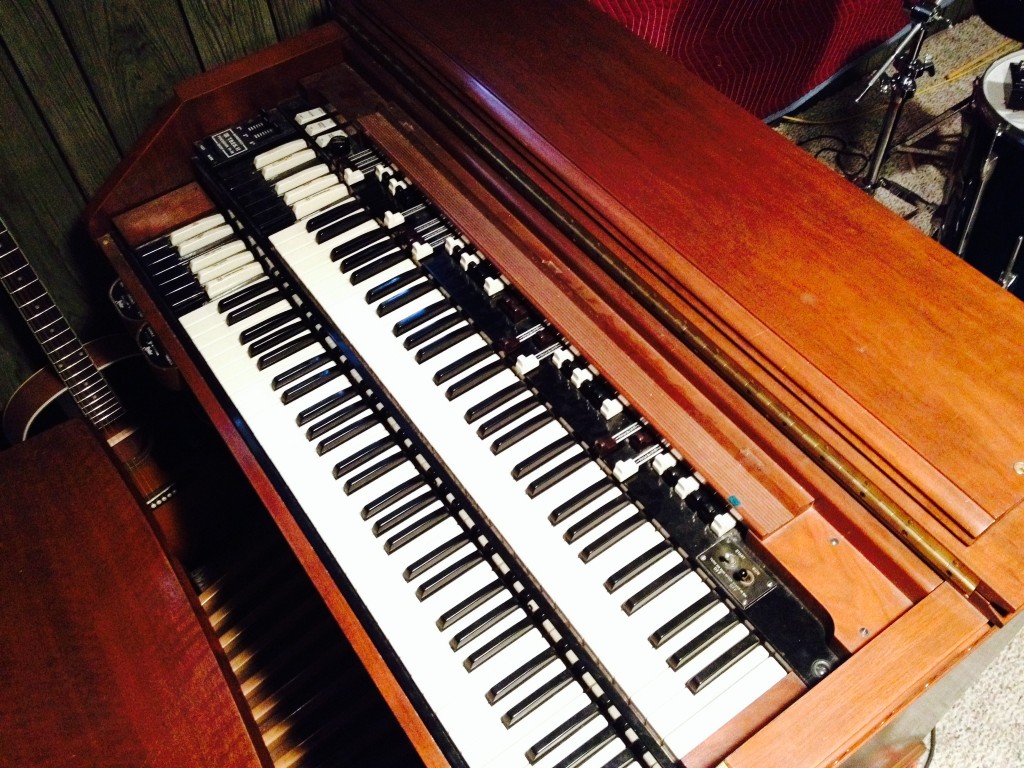 It’s also one of my favorite organs in terms of sheer tone, sentimentality aside. Everything is stock with the exception of the chorus/vibrato line. I replaced the capacitors in the line and also replaced the resistor underneath the C/V tabs so the chorus is a bit deeper and more like the 3 series. Everything else is from the factory. You can hear it on the organissimo release Dedicated. You can hear and see it in action on this video from my Kickstarter promotion as well as this video.

When Hammond added the ability to adjust the virtual tonewheels in the SK series of digital organs, I knew instantly the first organ I wanted to try and match. So I spent an afternoon comparing the two organs one tonewheel and one drawbar at a time until I got the SK to sound as close as I could. I posted a video on Youtube of the results with the caveat that you cannot see which organ I’m playing. Astute viewers will notice the orientation of each organ that’s off camera with my previous videos of the C2 and would be able to deduce pretty quickly which is which. I also overlooked a very important setting in the SK2 that controls the percussion. I accidentally had it set to re-trigger on every note. The percussion in a real C3 or B3 is polyphonic but single-trigger, meaning if you’re holding any key down, it won’t re-trigger unless you lift your fingers off the keys. That combined with a bit too much brightness in the keyclick makes figuring out which is which a bit less difficult, although certainly some people were fooled. Here’s the original video:

I’ve been tweaking my custom tonewheel set for the SK series ever since, taking into account how it sounds through various speaker systems, Leslies, stages, gigs, etc. I’ve also been experimenting with running the SK into the C2’s preamp. The following clip is an example of that.

The signal flow is as follows: SK2 into the C2 preamp via the RCA jack on the expression pedal box, C2 preamp direct out via a custom direct box into a mixer, the mixer aux output into a Mini Vent, the Mini Vent stereo output to my DAW.

I posted this clip on the Keyboard Forum and the responses were interesting. Some could not tell the difference. One poster asked if I had put the SK through the C2 preamp. Some correctly identified the SK. One fellow poster claimed that routing the SK into the C2’s preamp was unfair, since you’re not going to have that luxury in a live situation (although I’ve been toying with the idea of finding an AO-10 preamp and wiring it up with 1/4″ jacks to go in between the SK and my Leslie!) Point taken. The AO-10 preamp from the C2 definitely puts a cool vibe on the SK’s signal. So what’s the actual difference? I decided to inject some white noise into the preamp and see what’s up in a spectral analyzer (with the awesome and free Voxengo SPAN). 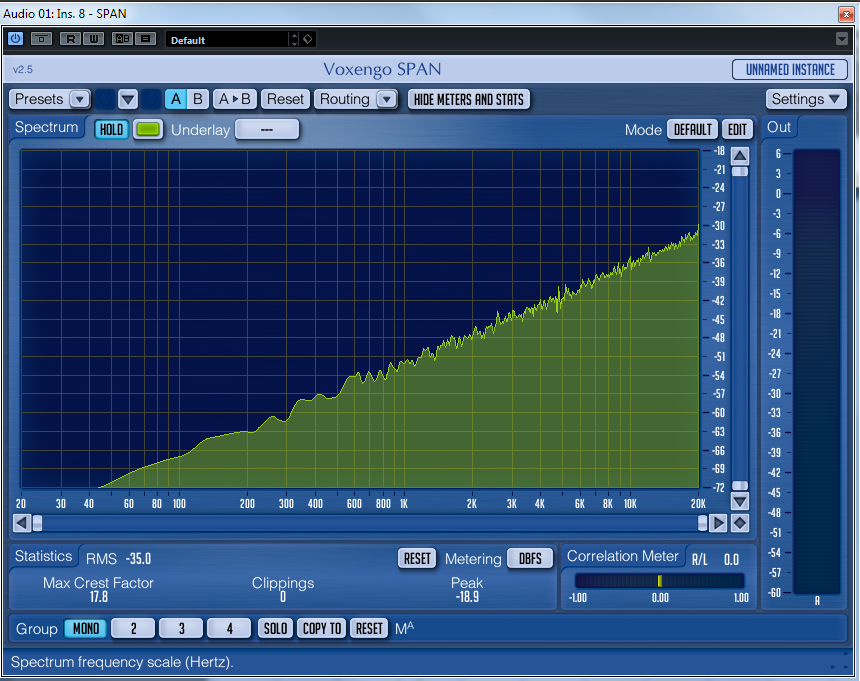 White noise from the Test Tone generator in Cubase 7.

And here is the white noise after it goes through the AO-10 preamp in the 1954 Hammond C2.

White noise after going through the AO-10 preamp.

Look at that beautiful gentle roll-off in the high-end. The whole signal takes on a nice rounded curve rather than the straight linear line of the original signal. This of course is not very scientific and only reveals a fraction of what’s going on in the preamp. There is harmonic distortion, slewing, filtering, and all many of things going on in there. But it did give me a starting point to try and shape the output of the SK to sound more like the C2’s output without resorting to “cheating” and running the SK through the C2.

I started by using the onboard EQ parameters in the SK2. It has per-patch EQ and also global EQ via the knobs on the front panel. The per-patch EQ is quite powerful and includes the “TC” parameter which emulates the tone control adjustment on the original Hammond preamps like the AO-10. I have the tone control turned all the way up on my C2, so I set this parameter to -1 in the SK. According to the manual, -1 represents the knob all the way up. The SK actually allows you to adjust it beyond the real-life maximum, which yields some interesting results. Once that was set, I used the per-patch EQ to shape the signal a bit more, trying to match the timbre of the C2. I found that adjusting the low mids made a very big difference.

Watch the video and see if you can detect which organ is which. Listen for the quality of the key-click, the tones behind the main frequency of the notes, and the timbre of the percussion. Later in the video I turn the chorus on both. Listen to the depth of the chorus and the shimmer. Write down which organ you think A is and which you think B is and then watch the video below so see if you’re right.

Don’t cheat! Watch the first video before watching the one below.

How’d you do? The differences are minor but they are there. They are almost to the point where they are not much different than two different console Hammonds. My ’74 B3 certainly sounds different ’54 C2. The key areas of the SK that can be improved are:

Distortion – There’s some fuzz around the edges of the real thing, due to the preamp. That difference gets much smaller when the SK2 is run through the preamp. I can kind of mimic it using a small amount of the onboard overdrive, specifically the SK’s EP model which is much more subtle and better sounding than the TUBE model.

Leakage –* (see addendum 1 below). So the character of the individual tonewheel leakage on some notes is different between the two. I got them as close as I can but I cannot change the actual frequencies involved in the leakage.

Chorus / Vibrato – The ’54 is very different than the mid-60’s A100 that the SK’s c/v is modeled after. They do not sound the same.That said, I don’t think one is necessarily better than the other, just different. Nor do I have a mid-60s organ to compare it to but the SK2 chorus sounds very good to me. I’m excited about having the new Mix Balance control that was introduced in the XK1c on the SK. That might help to get it closer to the ’54.

I’d like to see Hammond offer models of various eras of c/v, including the very cool and unique 2nd tone generator chorus of the BC model. Then again, I’m probably the only one that cares!

To summarize, we’re nitpicking over extreme minutia here. Are these issues important in the midst of a burning solo while competing with a distorted guitar, bashing drums, and thundering bass guitar? Probably not. Will they even be apparent in the average supper club jazz trio setting? Not really. Your choice of amplification has a greater effect on the sound than whether or not the keyclick is 100% authentic or the leakage is 100% historically accurate. We’ve gotten to the point where we can take a 35lbs two manual organ to the gig rather than a 400 pound back-breaker. What a great time to be a musician! We’re 95% there in terms of tone. That extra 5% isn’t necessarily a deal-breaker, but its still fun to try and get there.

* Addendum 1 –  According to my friend and Hammond guru Todd Phipps (ie B3Nut), I am incorrect in stating that Hammond moved the tonewheels between 1954 and 1974. Todd wrote on my Facebook thread:

…the arrangement of the tonewheels in your ’54 is the same as a late B-3 – the change from a sequentially-wired terminal strip to a chromatically-wired terminal strip with the narrow brass generator cover took place around 1952. A red-cap generator from a ’74 B-3 will drop right in and wire right up. The reduced leakage of the later red-cap instruments is partly due to the more stable/accurate filtering of the later filters as well as the RC networks on several of the frequencies that got rid of low-frequency rumble on those tones.

That makes sense and aligns with what I hear on the C2, especially in the middle range. There is a LOT of low frequency information in those tones that is not there on the SK2 nor is it there on my ’74 B3.

* Addendum 2 – Over on the Keyboard Forum thread and my Facebook thread, I talked about the possibility of Hammond adding a scaling parameter to the SK’s keyclick LPF. I noticed that the keyclick gets duller as you go down into the bass ranges on the C2 but it stays the same on the SK. The SK has a LPF parameter in the keyclick submenu but it is static, ie it affects all notes equally. If it was tied to note values with a scaling parameter, it could more authentically emulate the C2.

However, I incorrectly assumed the cause of the dullness in the bass range of the C2 was due to filtering. Again, Todd Phipps corrected me:

… keyclick is mainly a product of the instant switching of the sine waves at something other than zero cross (and there’s a bit of contact bounce in that mix too.) The higher the frequency being switched, the stronger the HF component of the switching transient.

And again, this makes a lot of sense. Todd helped me modify the chorus/vibrato on my C2 to more closely match the 3 series organs and is a wealth of knowledge on the tonewheel organs. Thank you, Todd!

* Addendum 3 – Hammond just released the XK1c which is like an SK series organ but without the extra voices. The XK1c has some features that the SK series does not yet have, although Scott May from Hammond mentioned on FB that the features are coming for the SK series via an OS update soon. One of the coolest features in the new XK1c is the MIX parameter in the chorus/vibrato submenu. This parameter lets you balance the dry, non-affected organ signal with the chorused signal and helps dial in a smoother, more vintage sounding chorus. Check out my quick review of the XK1c to hear it in action.