This will not be a post about how hard it is to be a musician in the digital age. We all know it isn’t a cakewalk. That said, I would rather be doing what I’m doing than work for someone else in a cubical somewhere making shareholders rich. I may not be a millionaire (or even a hundred-thousandaire… or even half that… I’ll stop now before I get depressed) but I am happy with my work.

But it bears repeating as often as possible that when it comes to online streaming, which unfortunately appears to be the new form of distribution replacing physical sales, musicians are getting completely screwed.

Just how screwed? Back in 2010 the site Information Is Beautiful created a stunning infographic displaying how many streams an artist would need per month to generate enough income to be on par with a minimum wage job. And the results were horrifying. 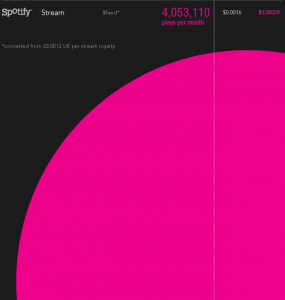 Yes, dear struggling independent musician operating in either a niche genre with less worldwide fans than your average hockey stadium capacity (ie, jazz) or (worse) in a popular field with millions of other competitors (ie rap, rock, pop): You are screwed. You need over 4 million streams per month to make a measly $1,160 which is probably not even enough to pay your rent and car insurance.

Now Information is Beautiful has updated the stats for 2015 and the good news is that the rates have increased due to public and political pressure. It now takes about 1 million plays on Spotify to reach minimum wage. So that’s an improvement, right? Sure, but let’s be honest here: If you’re getting 1 million plays a month on Spotify you’re probably already a big name in the business.

What’s the point of all this? Well, nothing you haven’t heard before. Streaming services are not direct income generators for most artists. This goes for Pandora, LastFM, Youtube, etc. But they are good means of distributing your product as a relative unknown. I have reached a lot of people via my YouTube channel and I make a few hundred bucks a month from it, which is nothing to sneeze at. And I’ve certainly gained new fans from Pandora and other services. I’m confident that some of those fans actually do buy physical product or at the least some downloads from iTunes and the like. But as streaming becomes even more pervasive and convenience continues to trump all else, I’m sure those sales will drop as well.

So what’s the solution? I don’t really have one except to keep making music and perhaps put the focus on formats that are not yet streamable, like 5.1 surround. I’ve discovered a vital community of surround enthusiasts since releasing THEO. And they are hungry for more content which is why my next two releases (organissimo and another electronica / ambient project) will also have 5.1 versions. Vinyl is another viable option to spur actual physical sales.

One day maybe I’ll be well-known enough that I can pull my catalog from Spotify ala Taylor Swift. But until that day, it’s best to focus on the strengths of the format rather than the pitiful payments.