As the processing capabilities of personal computers increase and the skill of programmers to emulate analog audio qualities in digital form also improve, plug-in companies have rushed to digitally re-create almost every piece of classic gear from the golden era of recording studios. These studio stalwarts exist in several incarnations from various companies, with varying degrees of success. You’ve got your Pultec emulations, your 1176 emulations, your LA2A emulations, Neve, API, and SSL emulations, plate reverb emulations, EQ emulations, microphone preamp emulations… and the list goes on and on. 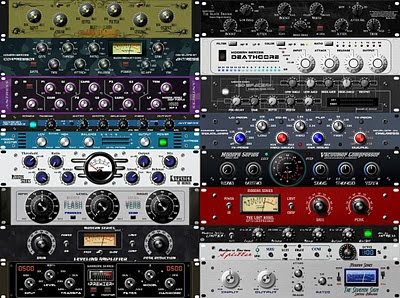 One manufacture from that era conspicuously absent so far is Valley People of Nashville. The history of Valley People is quite interesting and you can read more about it on their website. The short version is that an electronics guru named Paul Buff worked with Frank Zappa to build Zappa’s famed PAL studios and designed some proprietary gear in the process. A short time later, Buff officially formed Valley People and put those designs into commercial products including the Gain Brain, Transamp, Kepex, and the Dyna-mite.

My first exposure to Valley People gear was in my friend Glenn Brown’s studio. He had an rack of the now defunct 800 format filled with Kepex and Gain Brain modules. I noticed he liked to use them on drums. But his real secret weapon was a stand-alone stereo Dyna-mite compressor. He no longer has the rack, but he still uses the Dyna-mite frequently as a drum bus parallel compressor, a role in which it absolutely shines.

An original Dyna-mite in a beige plastic case. This is like the one my friend Glenn owns.

You can still pick up an original Dyna-mite unit on the used market for a reasonable price. We’ll see how long that lasts! Of course the limitations of outboard gear include the lack of recall and the obvious fact that you can only use it on one or two things at a time unless you own a rack of several. Who has space for that?

So I was very excited when I found Softube’s digital version of the Valley People Dyna-mite. If it captures the essence of the real thing, it would not only be cheaper but much more convenient and flexible to own. I just happen to have a real Dyna-mite unit here in my studio, on loan from Glenn, so I thought I’d do a quick comparison between the plug-in version and the real thing. This is not a very scientific endeavor so please excuse any oversights.

First and foremost, the Softube Valley People Dyna-mite plug-in looks like the real deal, with the same controls in the same order, the same LED gain reduction metering, and even the same fonts. It is a prime example of the modern philosophy of skeuomorphism in digital design but in this case it makes perfect sense. Softube intends the plug-in to faithfully capture the real analog unit. Making the plug look the same is the first step.

The first control on the left is for the THRESHOLD which determines the signal level at which the compressor is engaged. Second is a knob for RELEASE which controls how quickly the compressor returns to normal (no compression). The next control DET, the detection circuit, is switchable between INT (internal), DS FM (essentially de-essing), and EXT (external). Next is the 8 LED meter followed by the MODE switch. The three modes are EXP (expansion), OUT (bypass) and LIMIT (limiter). Next is yet another switch labeled DET, this time linked to the MODE and with three choices; AVG (average), PK (peak), and GATE. Essentially this changes the ratio of the compression. Finally a RANGE knob and OUTPUT knob finish out the controls.

This is the dual unit I’ll be using for this test. Pay no attention to the LA610 beneath.

It is beyond the scope of this review to describe how all these functions work in conjunction with one another. The original Dyna-mite manual is available at the Softube website if you want to dig in to the technical side of things. In short, you can use the Dyna-mite not only as a compressor but also a gate, fast attack limiter, slow attack limiter, expander, or de-esser, making it quite versatile. The plug-in purports to accurately model all of this, including a “Weird Limiting” mode which is an unintended feature of the original device. From the review on the Sonicscoop site:

If the detector mode is set to LIMIT and the detector type is set to GATE, you end up with a scenario in which any signal above a certain threshold is hard limited. The range and release controls really come into play here. If the range is set too high, you end up hearing nothing except clicking, presumably the attack time of the limiter as it is engaged. Similarly, if the release time is set too long, you also end up with silence, as the compression takes to much time to be released.  However, if your range is set to around 5-6 dB, and the release time around a few ms, you’ll hear some interesting pumping and modulation effects on your source.

Sounds like fun! The manual from Softube goes into great detail about how to use the Dyna-mite and is worth a read through upon purchasing.

Ok, so now to the nitty gritty. How accurate is Softube’s emulation? Let’s do some examples. I’ll use the Dyna-mite as a parallel drum bus compressor, since that’s most likely what I’ll be using it for in most circumstances.

Side note: What is parallel compression? It is simply mixing some dry, uncompressed signal in with the compressed signal. For background and examples, this Sound On Sound article is very good:

Here is a drum sample from my upcoming progressive rock project. The drummer is my friend Kevin DePree playing his DrumCraft acrylic kit. This is a dry sample with no bus compression although there is EQ on the individual mics and some light compression on the kick and snare.

Next, let’s use the Softube Valley People Dyna-mite as a parallel bus compressor. Notice I am not matching levels with the dry audio as this is not about how the compressor colors the sound compared to the dry but rather whether the plug-in sounds like the real deal. I will level-match the audio from the plug-in and the real unit.

The settings on the plug-in are fairly simple. Threshold and Release are both at 12 o’clock, the detection circuit is set to INT, the MODE and DET switches are set to LIMIT and AVG and the range is also at 12 o’clock. It has a nice, full, and punchy sound. I’m compressing the signal quite hard, reaching about 20 db of gain reduction on the heavy peaks. But when mixed back in with the dry signal, it adds both body and girth to the sound. That’s what parallel compression is about! 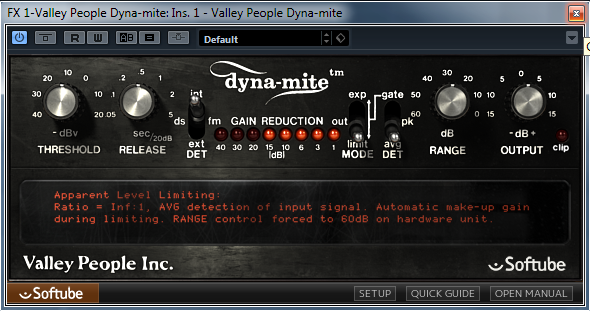 Softube Valley People Dyna-mite settings for the above sample.

Now let’s see how the real Dyna-mite sounds with similar settings. This was a bit tricky because the unit I have needs to be calibrated. One side requires much more make up gain than the other. This may affect the sound of the actual compression and skew the comparison.

To my ears, the real unit has very slight upper end sparkle and also a “live” quality to the midrange, especially evident on the snare. I’m talking a minuscule amount here, nothing huge. Of course, this could be due to a couple of things; I had to manually align the audio from real unit to the original un-compressed track and while I did it to what appeared to me to be sample accuracy, it could be ever so slightly off which would induce tiny phase issues and thus alter some frequencies. It could also be due to the extra analog to digital and digital to analog conversion required in order to insert the real unit into my system. It could be due to the issue of the output of the first channel on the real unit needing calibration. And finally this particular Valley People unit could be overall a bit out of spec. It did come used off eBay afterall and is over 30 years old. 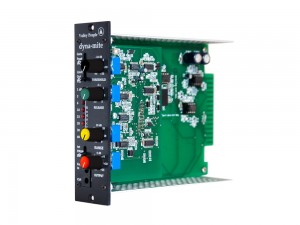 Valley People was bought by the PMI Group in 2007 and is now making 500 series versions of their most popular designs. A 500 series Dyna-mite is available but at a cost of $599.

Regardless, the simulation and the real deal are extremely close. The character of the compression is dead on. That little bit of extra sparkle could be added with some EQ. Or perhaps the track doesn’t need it? The flexibility of the plug-in certainly adds to its appeal. It doesn’t use much CPU and can be used as a gate, de-esser, and limiter as well as a compressor. Not to mention you can use it on as many tracks as your computer can handle.

I’ve experimented with the Softube Valley People Dyna-mite on vocals both as compressor and de-esser. As a de-esser it does a good job with that vintage vibe. As a compressor on vocals, not so much. It is better on percussive material, guitars, and keys (especially for that extreme in-your-face compressed piano sound). I think it’s strong point is as a parallel bus compressor on drums. It really shines in that role and is worth the money for that purpose alone. And this is true of both the real unit and the plug-in. Kudos to Softube for the authentic emulation. It emulates with near-perfect accuracy the Dyna-mite’s strengths, character, oddities, and weaknesses.